Under Roy Midwinter, the firm of W. R. Midwinter Ltd led British ceramic design in the 1950 and 1960s with new, modern shapes that, although radical, were a tremendous success in the marketplace. The Stylecraft, Fashion and Fine shapes were all successful, but the high development cost for the new tableware shapes demanded by the public led to financial difficulties in the late-1960s and in 1968 the Midwinter business merged with that of J. &. G. Meakin Ltd. The new enterprise was short-lived and in 1970, Josiah Wedgwood & Sons Ltd took over the merged Meakin and Midwinter business, keeping both names as separate earthenware brands. As part of Wedgwood, Roy Midwinter remained at the head of his former family business and in 1972 Wedgwood launched the Roy Midwinter-designed Stonehenge range of oven-to-table ware.

The Stonehenge range was designed by Roy Midwinter, modelled by the experienced company modelers Sydney and Derek Machin and was decorated with designs created by Jessie Tate, Eve Midwinter and other graphic designers.

The range was launched in February 1972 with the release of four matt glazed patterns ‘Blue Dahlia’, ‘Bluebells’, ‘Flowersong’ and ‘Medallion’.

The thick-walled ‘chunky’ shapes, studio pottery finishes, and vivid decoration were as new and radical as any of Midwinter’s earlier triumphs, and again it proved to be a design success. The first three patterns were followed by a further seven patterns released in August 1972. ‘Sun’, ‘Moon’ and ‘Earth’, now regarded as perhaps the most iconic Stonehenge patterns were released in March 1973. Advertising in Tableware International (Vol 3, March 1973) has the following description of the wares:

So simple it generates its own sophistication. In these days of mass production it is so refreshing to find the slight variations in decoration normally only associated with expensive hand-thrown studio pottery. Each piece is unique.

Although launched with a matt glaze, the majority of the Stonehenge range had a glossy ‘oatmeal’ glaze where reactive particles added to the glaze cause an irregular speckling over the surface of the ware. The wares were finished with hand-applied iron oxide banding to the edges that contributed to the ‘studio pottery’ look. Stonehenge connected immediately with the public spirit of the 1970s with the interest in self-sufficiency and birth of popular concern for environmental issues exemplified by the television comedy ‘The Good Life’ starring Richard Briars and Penelope Keith which screened between 1975 and 1978.

‘Sun’, ‘Moon’ and ‘Earth’ designed by Eve Midwinter and launched in early 1973 have become design icons for the period. All of the features discussed above were supplemented by blocks of brilliant colour. These were screen-printed and then applied to the ware. ‘Creation’ – the plain, undecorated ware (possibly first known by the name ‘Stella’), complemented the striking patterns.

Jessie Tait and Even Midwinter were the main pattern designers for Stonehenge and of the 60+ known designs, the most decorative (apart from ‘Sun’, ‘Moon’ and ‘Earth’) are probably ‘Autumn’ ‘Spring’ and ‘Invitation’ by Eve Midwinter and ‘Nasturtium’ and ‘Caprice’ by Jessie Tait. The more restrained ‘Wild Oats’ by Eve Midwinter released in 1974 was enormously popular with the public.

Other patterns of interest are ‘Melons’, a sophisticated re-working of a Clarice Cliff original on a glossy, white glaze background. This reflects Wedgwood’s use of the intellectual property represented by the patterns created by Clarice Cliff in the 1920s and 1930s at the Newport Pottery Co. Ltd (later owned by Midwinter and subsequently Wedgwood). ‘Crocus’ and ‘Oranges and Lemons’ are also versions of Clarice Cliff designs.

Of the originators of Stonehenge, Roy Midwinter left Wedgwood in 1981 to found a design studio. He died in 1990. Jessie Tait moved from Midwinter to the Johnson Bros division of Wedgwood in 1974 – after nearly 30 years with Midwinter. Eve Midwinter, the real innovator behind the phenomenal popularity of Stonehenge remained with Wedgwood until 1986 before becoming an independent designer. 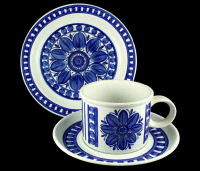 Blue Dahlia was one of the first batch of six patterns on the Stonehenge shape and was released in February 1972. It has a matt glaze. 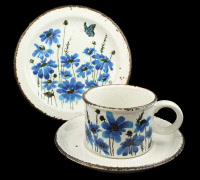 ‘Spring’, part of a colourful series that included ‘Summer’, ‘Autumn’, and ‘Winter’ were popular later patterns in the Stonehenge series.

‘Sun’ designed by Eve Midwinter is probably the most well known, popular and long-lived Stonehenge pattern.  It was released in 1973 and was still in production in the mid-1980s.  The pattern features strong colours, a glossy glaze and the rustic iron oxide treatment to the rims.