‘Art Deco’ was an international style that dominated architecture and the decorative arts from about 1925 until the start of the Second World War in 1939.  Elements of the art deco style continued into the 1950s and there have been significant revivals of interest in art deco-influenced design in the 1960s, 1970s and 1980s.  Like its predecessor, Art Nouveau, art deco’s impact has been primarily on the decorative arts including architecture, interior and industrial design, fashion design and the graphic arts.  As such, art deco’s influence has been very important in the ceramics industry, fundamentally changing accepted concepts of both shape and decoration.

The origins of ‘art deco’ style are said to lie with the group of French artists known as La Société des artistes décorateurs formed shortly after the Universal Exposition [held in Paris] in 1900.  The group’s purpose was to promote the superiority of French decorative arts, and it culminated in the organisation of the now famous Exposition Internationale des Arts Décoratifs et Industriels Modernes (International Exposition of Modern Industrial and Decorative Art) in Paris in 1925.

Art deco style is acknowledged as an amalgam of many different decorative influences including neo-classical elements, cubism, art nouveau and many others.  In its original conception, as seen in the furniture and object d’Art at the 1925 exhibition, it was a style that was rich and opulent, but at the same time elegant and above all ‘modern’.

Characteristic of art deco, and seen widely in art deco ceramics, is the use of geometric shapes.  Stepped forms, the ziggurat and pyramid, derived from Aztec and Egyptian culture are common.  Motifs widely used in art deco decoration include stylized representations of the rising or setting sun, the chevon, and geometric patterns based on repeated lines and overlapping rectangular shapes.  Stylised floral decoration is common on ceramics, but differs radically in style from that of art nouveau.

Art deco had a significant impact on the UK ceramics industry beginning with the startling and paradigm-breaking work of Clarice Cliff from 1928.  Cliff is believed to have visited the 1925 exhibition, and there are hints of what was to come in earlier pottery decoration by the designer and decorator John Guildford of Barker Bros. 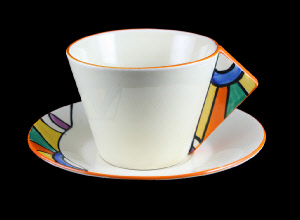 This ‘Conical’ shape cup with a solid triangular handle was modelled by Clarice Cliff in what is now recognised as the geometric Art Deco style. It was a radical departure from conventional teaware design. The pattern is ‘Bignou’ part of the Bizzare range. Early 1930s. 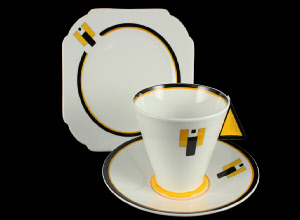 A bone china ‘Mode’ trio designed by Eric Slater for the Shelley Potteries. Clearly imitative of the Clarice Cliff ‘Conical’ shape, this was sophisticated teaware aimed at a more affluent market looking for the latest in modern style. 1934. 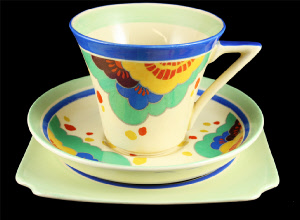 ‘Gaylee’ one of the most striking of the Doulton Art Deco-style shapes and patterns. The earthenware cup has an outward flare and a sharp ‘7-shaped’ handle. The pattern number is D5305. 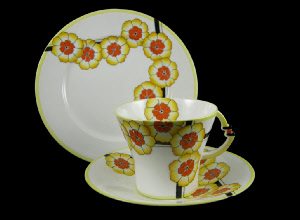 A Royal Albert’ Art Deco-style trio in the ‘Belmont’ pattern. This bone china trio produced in the mid-1930s combines classical and modern features and would appeal to those looking for modern, but not too radical design.