A marbled earthenware made by mixing clays of differing colours.  Associated with Thomas Whieldon, but manufactured by many potteries between about 1750 and 1820.

A vitreous stoneware introduced by Josiah Wedgwood in circa 1780.  The name is from a resemblance in shape to bamboo – an eastern novelty of the time. Caneware was fashionable in the Regency period (c. 1795 – 1837).

A drab-coloured vitreous stoneware flagon originating in Germany in the 16th century, with bearded mask decoration in relief.

Stained or naturally coloured clay bodies which fire to black.

Glazed white porcelain, usually in the form of ornamental ware and figures.

A vitrified stoneware body introduced by Josiah Wedgwood in the 1770s.

A generic term for a class of white vitrified semi-transparent stoneware developed at Castleford, Yorkshire, in the late 18th century.

A stoneware stained black and fired at a temperature just sufficient to make it non-porous.

Ceramics made and/or decorated to commemorate a particular event.  Typical commemorative wares are those created to mark royal events – coronations, royal weddings, royal births and jubilees.  More generally, commemorative ware has been produced to mark events of local or national note. Although covering the gamut of ceramics, tankards, jugs, plaques, mugs and miniature wares have been favoured commemorative wares.

A cream coloured earthenware with an opaque, cream-coloured glaze. Creamware was one of Josiah Wedgwood’s early innovations, introduced in the 1760s. Wedgwood incrementally improved the body and glaze to the point where the quality and look of his Creamware threatened the dominance of porcelain in the houses of the rich and famous. Wedgwood’s creamware was widely copied by other Staffordshire manufacturers and he later changed the name to that of ‘Queensware’.

A tin glazed earthenware. The name was originally used for Dutch wares until Georgian times, when it became a general descriptor for tin glazed wares made in England as well as Holland.

A generic term for plates, and other planar ceramics See ‘Hollow Ware’.

Earthenware body with the addition of powdered calcined flint.

An English term for tin-glazed earthenware.

Stoneware glazed by throwing salt (sodium chloride) into the kiln during a high temperatures firing.  The salt is vaporized combines with components from the clay to form a transparent glassy surface on the wares.  Only stonewares could be salt glazed because of the high temperatures needed for vapourisation of the salt in the kiln.  Salt glazing was replaced by lead-based glazes on domestic wares from the mid-18th century.  Its use is now confined to studio and art pottery.  There are different categories of salt-glazed stoneware depending on the body used.

A class of earthenware decorated with slip poured or painted over the biscuit prior to glazing. Coloured slips may be used.  Slip decorated wares date from the mid-16th century.

A figural or character jug sometimes of grotesque from. Said to be named after Toby Fillpot (Henry Elwes) recorded on a print published on his death in about 1761.  Made by numerous manufacturers, the best know of which is probably Doulton.

An earthenware body produced by staining the biscuit with metallic oxides which were later absorbed into a transparent lead-based glaze. Tortoiseshell Ware was produced, most famously, by Thomas Whieldon in the mid-18th century. Also know as Whieldon Ware.

A deformed or otherwise defective ceramic item discarded at manufacture.

A term used to describe large, slip-decorated earthenware meat dishes made in the 19th and early 20th century. A reincarnation of earlier slipware, Welsh Ware was made in rural potteries long after more advanced earthenware bodies and decoration had been developed.

Products of the Fife Pottery, Scotland, manufactured between 1880 and 1930.  Wares include toilet sets and ornamental pottery.  Wemyss ware was decorated mainly with botanical themes

A term used to describe the agate ware and tortoiseshell ware made by, or in the style of, Thomas Whieldon.

Minature decorative ceramics made in the form of animals, birds or everyday items. Wade ‘Whimseys’ are the best known.

White ceramics that have been glazed, but not decorated.  Often sold by manufacturers to other businesses specialising in decoration.

The second class of ‘Pratt Ware’ are the pot lids and other domestic earthenware decorated with under-glaze polychrome transfer prints. The firm of F. & R. Pratt (descendents of the William Pratt referred to earlier) were the first to manufacture multi-coloured pot lids and these are also termed ‘Pratt Ware’. The Pratt’s artist and engraver was Jesse Austin and the lids were decorated with three colours plus brown for the key plate (in the case of the Pratt factory). Other manufacturers copied the Pratt’s process and the other significant makers of Pratt Ware were T. J. & J Mayer, John Ridgway, Bates & Co. and their successors at the Cauldon Place Works Brown-Westhead Moore & Co. Although pot lids are the best known Pratt Ware, the name is also applied to the domestic earthenware decorated using the same colourful underglaze prints.

Early (circa 1780-1830), ‘Pratt Ware’ is a creamy earthenware, usually with relief moulding, decorated beneath the glaze with a colour palette of black, cobalt blue, orange, yellow and green. These are metal oxide colours suitable for the high-temperature firing used for the ware. The name ‘Pratt Ware’ is believed to have originated from an attribution in a 1909 issue of The Connoisseur magazine based on a specimen with the name ‘Pratt’ on the base and probably manufactured by William Pratt. Similar wares were made by potteries throughout the United Kingdom including those at Leeds, Castleford and the Edinburgh potteries.

A generic term for ceramic cups, mugs, jugs, and other tablewares with a deeply concave interior.  See ‘Flatware’.

Ceramics decorated in intricate patterns using a colour palette of predominantly deep blue, iron red and gold.  he imari colours and patterns originated as English adaptations of Japanese export porcelains.  Royal Crown Derby is the best known manufacturer of imari wares (to this day!), but imari wares were produced by most manufacturers of bone china.

Brownish-red earthenware covered with a thick black glaze, named for one pottery known to have made it from c.1751.

Porcelain made in Japan specifically for the European market.

A generic term for earthenware glazed with a glossy black glaze.  ‘Jet’ teapots were a common Staffordshire product up to the Second World War.

A ceramic lace manufactured by dipping lace into wet slip followed by modelling, drying and firing in a kiln. The technique originated in France and was used by Mintons in the mid-19th century.

A heavy earthenware made from a body that includes blast-furnace slag.

A decorating technique using metallic oxides to impart a lustrous finish to a ceramic.

A brightly coloured (usually), glossy, stoneware or earthenware with a general resemblance to the original Italian tin glazed maiolica earthenware. English majolica was first produced by Herbert Minton between 1851 and 1862 using a heavy stoneware body and a tin-based glaze.

A generic term for the blue and white porcelain manufactured at Jingdezhen and shipped to Europe through the port of Nanking.

Dessert wares in the shape of a Nautilus shell.  Originally made by Josiah Wedgwood in earthenware (Queen's Ware) in the 1770s, but copied in other bodies by other potteries.

A drab- coloured salt glazed stoneware made around Nottingham from circa 1680.

A marble-like, unglazed porcelain body containing feldspar introduced in 1842 by William Copeland and named after the Greek island of Paros.  Parian, with its marble-like qualities was widely used for busts and statuary.

An earthenware body introduced by Josiah Wedgwood in circa 1780.  Pearlware was a lighter coloured version of Wedgwood’s creamware produced by adding calcined flint and china clay to the paste. Pearlware was an ideal ground for underglaze transfer printed decoration.

A vitrified stoneware introduced by Josiah Wedgwood in the 1790s and used for the manufacture of cooking and serving ware. The defining characteristics of Piecrust Ware are the pastry-like colours and the use of piecrust decoration.

Gaudy Welsh is the term used to characterise a class of ceramics defined by their colour palette and decorating style. The term was coined by the American historian Prof. Howard Williams for the simple domestic and ornamental wares produced by numerous potteries and hand decorated with mainly floral motifs using a palette of underglaze cobalt blue, russet (orange-brown), green and pinkish copper lustre. The Welsh Potteries (Swansea,Cambrian, Ynysmeaudwy, Llanelli etc).were important producers, but most Gaudy Welsh pottery was manufactured in the North Staffordshire potteries – where the style probably originated. The period of production was from the 1820s to the late 19th century. Although primarily for domestic sale, large quantities were exported to North America. Most Gaudy Welsh ware is earthenware and is unmarked. Allertons (Charles Allerton & Son Ltd), continued manufacture of Gaudy Welsh wares as a special line well into the 20th century 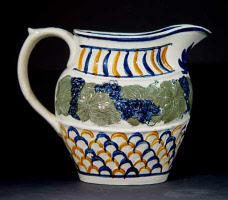 The term ‘Pratt Ware’ is applied to two classes of  polychrome, under-glaze-decorated earthenware. Both were manufactured by the company of F. & R. Pratt & Co. of Fenton, however, the Pratt business was only one of many manufacturers of ‘Pratt Ware’.

An alternative name for Wedgwood’s creamware, applied later in recognition of the wide acceptance of the ware, including by royalty.

A vitreous reddish-coloured stoneware much used, because of its fine texture, for lathe-finished wares. 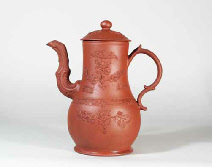 An unglazed redware coffee pot, circa 1760, maker unknown. The pot is decorated with applied flowers and scroll work and the handle and spout show Rococo influence.