In 1756, three men, John Heath a Derby banker, Andrew Planche a ‘china maker’ and William Duesbury an enameller from Staffordshire, entered into an agreement by which they became “co-partners together as well in the art of making English China as also in buying and selling all sorts of wares belonging to the art of making china”.

The trio were not the first to manufacture porcelain in Derby as Planche, the son of a Huguenot immigrant, had been ‘china making’ in the city since about 1750. There has been the suggestion that Planche may have supplied china to William Duesbury (in London) for decorating, and this led to the later partnership referred to above. Whether true or not, the formation of the partnership marks the start of the real history of china manufacture in Derby.

John Heath, an Alderman of Derby, was the financier of the venture, contributing £1,000; Andrew Planche the potter, and William Duesbury the artist and motivating force. The factory was established on the Nottingham Road.

The partnership was immediately successful and within a short period large quantities of good quality china were being dispatched to eager markets in London to be sold by their Factor, a Mr. Williams, at his warehouse at Craig's Court, Charing Cross. In early-1770 Duesbury and Heath purchased the Chelsea China Works in London from Nicholas Sprimont making them probably the largest china manufacturer in the United Kingdom. Most china making was at Derby with mainly decoration at the Chelsea factory and Duesbury closed the Chelsea factory in 1784 moving the plant, equipment and most of the staff to the Derby site. The Bow China Works were sold to Duesbury in 1776 and suffered a similar fate.

William Duesbury died in 1786 and his son, also William, continued the business until his death in 1797 at the age of 34. In 1795 ill-health had caused him to form a partnership with Michael Kean, an Irish china painter and designer, and following his death, his widow, Elizabeth Duesbury formed a new business partnership with Michael Kean. The two business partners married in 1798, but the union was shortlived, failing in 1806.

The business was advertised as for sale in June 1809, and was eventually sold in December 1811 to Robert Bloor who had been a clerk at Nottingham Road during the period of William Duesbury. Bloor and his brother Joseph managed the business until 1828 when Bloor’s mental incapacity forced the appointment of a manager, James Thomason. In 1844, Thomas Clarke, husband of Bloor’s only granddaughter, had Bloor declared insane and took control of the works. Joseph and Robert Bloor died in 1845 and 1846 respectively and at that point Thomas Clarke disposed of the business selling many of the moulds and other equipment to manufacturers in the Staffordshire potteries. The Nottingham Rd factory finally closed in 1848.

*This history of the Nottingham Road factory is based on that provided by Lewellyn Jewett in his 1873 edition of The Ceramic Art of Britain.

The closure of the Nottingham Road factory could have been the end of porcelain manufacture in Derby, however, a small group of the factory’s workers, marshaled by Sampson Hancock, a flower painter, continued the business from premises at King Street. The book by Twitchett & Bailey ‘Royal Crown Derby’ quotes Sampson Hancock on the origin of the King Street factory:

And in a letter to the Derby Reporter in 1875, Sampson Smith again reinforces his connection to the Nottingham Street heritage:

‘ … that although the old premises and materials were disposed of, six of the workmen, including myself, formed a combination to carry on the old Derby China Work and trade in another part of town with the same artistic, if not so extensive a success, in proof of which many of the articles made previous to 1848 by the old firm have been sent to us to match …’

Although Sampson Hancock was clearly the motivating force, King Street traded as a series of partnerships. According to Twitchett & Bailey, these were:

Sampson Hancock died in 1898, but the business continued under the management of his grandson James Robinson, and under the Sampson Hancock name. In 1916 there was an attempt to combine the small King Street business with the much larger Royal Crown Derby Porcelain Co. Ltd operating at Omaston Rd. The attempt was unsuccessful and the King Street business was then sold to a Mr. W. Larcombe who continued the business in partnership (from 1917) with Captain Francis Howard Paget. In the early 1930s Howard Paget and Mrs Padget assumed ownership of the business and in 1935 they sold the enterprise to the Royal Crown Derby Porcelain Co. Ltd, and the King Street premises subsequently closed.

The Derby Crown Porcelain Co. was established in 1876 by Edward Phillips and William Litherland and, other than location, had no connection with the earlier porcelain manufacturers in the city of Derby.

Phillips, a manufacturer from the North Staffordshire potteries, and Litherland, the proprietor of a porcelain and glass retailer in Liverpool had been associated with the Worcester Royal Porcelain Co. and had been frustrated in their efforts to establish a new porcelain factory in Worcester. Phillips, joint Managing Director at Worcester with Richard Binns was eventually sacked by the Worcester Board of Directors and in June 1875 the pair purchased land adjacent to the Derby Workhouse for a new factory. In December 1876 they were the successful bidders for the Workhouse itself and its extensive surrounds on the Omaston Road.

The limited liability company formed by Edward Phillips and William Litherland was capitalised at £67,850 divided into 160 shares each with a par value of £500. The major shareholders were William Litherland (20 shares), Edward Phillips (15 shares), John McInnes, a Scottish chemist and paint manufacturer (20 shares); and Henry Litherland, a china retailer and William’s nephew (20 shares). Minor shareholders, including John Litherland and William Bemrose held the remaining five shares. The company was thus well capitalised and within a few years had a workforce of over 400.

The right to use the title ‘Royal’ and the Royal Arms was granted by Queen Victoria in 1890 and the company changed, in name only, to Royal Crown Derby Porcelain Co. Ltd.

Harold Taylor Robinson, a Staffordshire pottery entrepreneur took control of Royal Crown Derby in 1927 and served as Chairman until his resignation in 1932.

In 1927 Robinson was one of the largest and most prosperous of the Staffordshire manufacturers, controlling Cauldon Potteries Ltd and a host of associated companies. To acquire the interest in Royal Crown Derby he floated a new company, Derby Securities Ltd, promoting the company as an investment to various friends. A sum of £35,000 was raised and used to acquire 61 ordinary shares and 19 preference shares – a majority shareholding – in Royal Crown Derby. As with many of his earlier businesses, Robinson personally contributed very little of the capital, but somehow ended up with a controlling interest.

Robinson was declared bankrupt in 1932, occasioning his resignation as Chairman of Royal Crown Derby, but although his shares in Royal Crown Derby were held as security by creditors, he was able to emerge from bankruptcy in 1934 with his controlling interest intact. By 1939 he was again Chairman of the company, remaining so until his death in 1953. He was succeeded in the position by his son Philip I. Robinson.

The other independent porcelain factory in Derby, the King Street Works, was acquired in 1935 consolidating the Derby porcelain industry in one company.

Philip Robinson relinquished the position of Chairman in 1958 and that of Managing Director in 1960 when a financier, A. T. Smith, acquired a controlling interest and took the position of Managing Director. Robinson family involvement in Royal Crown Derby ended with Philip Robinson’s resignation from the Board in 1961. In 1964 the company was purchased by S. Pearson & Son Ltd and became an independently operating company within the Pearson Group’s Allied English Potteries Ltd. Following Pearson’s acquisition of Doulton & Co. Ltd in November 1971, Allied English Potteries Ltd was merged with the Doulton group and Royal Crown Derby became an independently trading subsidiary of Royal Doulton Tableware Ltd.

Royal Crown Derby Porcelain Co. Ltd continued as a subsidiary of Royal Doulton from 1971 until 2000 when there was a management buy-out led by Hugh Gibson a former Royal Doulton executive and member of the Pearson family. Since the 1st July 2000 the company has remained a leading independent manufacturer of tableware and giftware.

These are official sites of the Royal Crown Derby Porcelain Co. Ltd.

Web site for the Derby International Porcelain Society. This is a comprehensive site with detailed histories of the Derby factories, access to the Society’s newsletters and research publications. 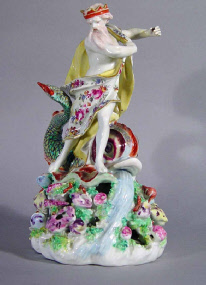 A beautifully modelled and enamelled figure of Neptune standing beside a large dolphin. Height 235 mm.

High quality porcelain has been manufactured at three factories in the City of Derby. Each business has had many owners and for convenience the businesses are often referred to by their location: the Nottingham Road factory (circa 1756 to 1848), the King Street partnerships (1848 to 1935), and the Omaston Road factory (1876 to the present day). Although separated by ownership, timeline and location the three have much in common and together give Derby a proud history of porcelain manufacture dating back to the mid-18th Century.